"May this occasion inspire us all to proudly go on from here with new energy and increased devotion.  Working for our fire company is a toil of service to our community, and in doing there is a good feeling of satisfaction.  When the second chapter of our history is written, may it be surveyed with pride of the progress and with pride of the accomplishments.  You or I may not write the words of the second chapter, but with God's help, we can help provide the contents"

As presented at the burning of the mortgage, February 27, 1966

of the Sergeantsville Volunteer Fire Company

The Village of Sergeantsville  was settled around 1700 and was originally part of Amwell Township.  Now part of Delaware Township, which was formed in 1838, the area was originally known as Skunktown until 1827.  When the Post Office was established, as legend has it, they refused to name a Post Office for Skunktown.  Sergeantsville was named for the Sergeant family and Charles Sergeant who was a Revolutionary War soldier.  The Sergeantsville Volunteer Fire Company has unofficially adopted the skunk as our mascot and it can be seen on the side of our 2008 Rescue Pumper.

Over sixty years ago in 1951 a group of men met in town hall making plans to form a fire company.  The men were seeking the need of a fire company to put out the many blazes in our town that would most likely wind up in a pile of rubbish by the time a neighboring fire company could respond their men with trucks that had capability of carrying water.

June 6, 1951 was the date the company was organized.  Everyone pitched in to help in our progress.  By mid July bylaws were formed.  The Amwell Church and many barns had burned before the need for a company was evident.

On June 27, 1951 the Township Committee gave the fire company permission to organize. 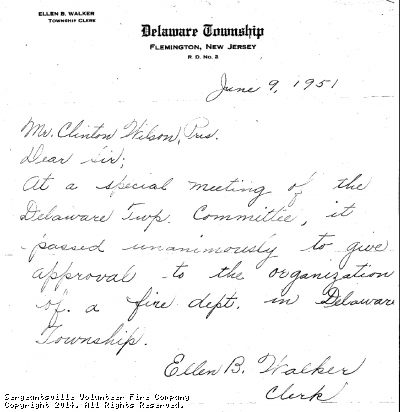 Some of our early apparatus included a donated pickup truck that no known pictures exist. 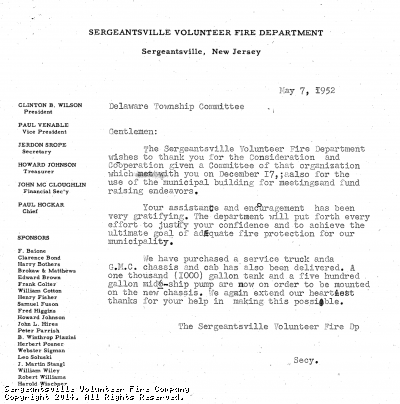 A 1953 GMC chassis was bought for $2130 and with a torch and tool the members put together our first fire truck.  The pump was purchased and tank installed and the members installed the pump and built the rest of the truck themselves. 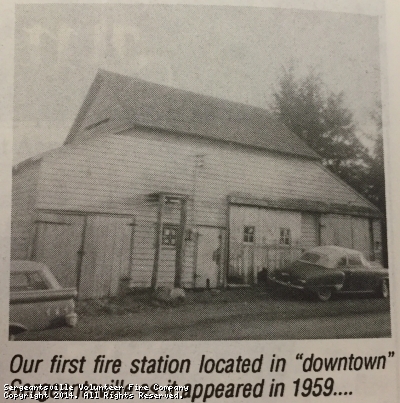 The truck was housed in Stanick's Barn equipped with a siren and a heater for those long cold winters. 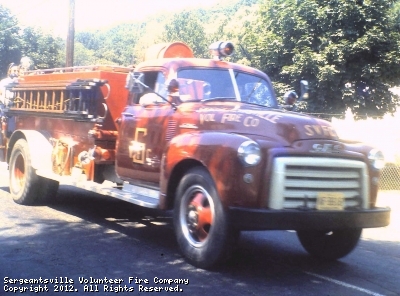 A ladies auxiliary was formed in 1952.  They served food, had stands at sales, had bake sales, dinners, rummage sales, shows, and card parties to raise funds for the fire company.  They were a very helping team.  They contributed very much to us by providing support at fires and just being there every day for us.  They were then with us side by side, through good times and bad.  The ladies auxiliary has since been disbanded. 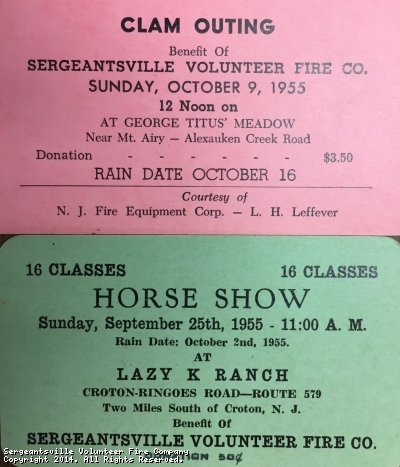 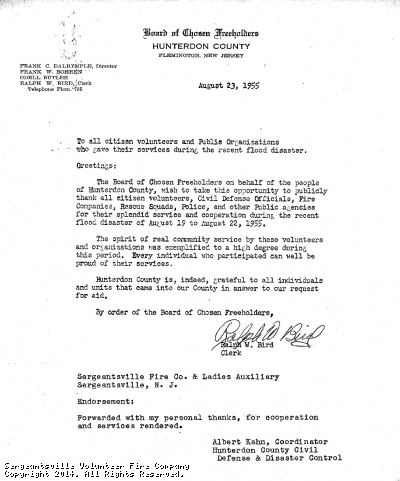 A 1936 Dodge Service Truck was purchased from the Washington Emergency Squad in Warren County and equipped with tanks and brooms to fight the brush fires. Below is a picture of the truck being brought into Sergeantsville for the first time by member Earl Todd Jr.  The truck is still painted white and lettered for Washington Emergency Squad.  Further below is a picture of the same truck in front of the new firehouse, now painted red with the Sergeantsville "S" on the door. 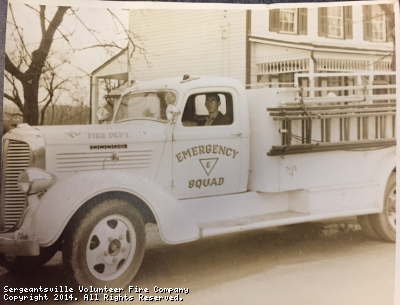 In July of 1953 the idea of a firehouse was brought about.  The fire company voted to purchase a lot of land that included the water reservoir.  More trucks were required and a place to store them was needed.     In 1955 construction began and finally on September 6, 1956 every member had a key to the firehouse, which most of the members built with their own hands. 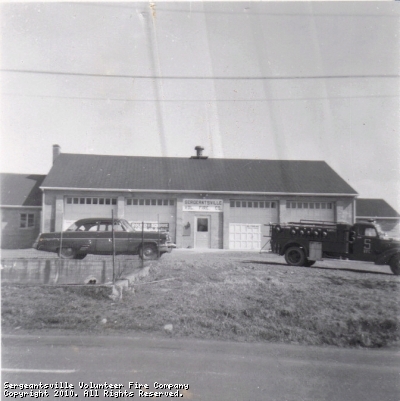 The township was a big help, and they let us use their meeting hall and a shed to house a truck until we had our own.

There was a reservoir by the roadside where the firehouse currently stands, it was later filled with dirt to make room for more parking and easier access for the trucks to exit the firehouse.

Soon after the building was intact in 1957, 2 Scott air packs were bought.  A generator was the next thing to come.  The lawn was planted and stucco soon applied to the walls.  Tables were crafted by the members,  Radios were soon installed in the trucks.  It didn't take long to pay off the mortgage, for we burned it in 1966.

Soon came a brand new service truck.  This 1966 Ford/Bruco Service Truck was the first new, commercially built fire truck for Sergeantsville.  When purchased it was said to be a "modern, up-to-date, fire-fighting unit".  Members who used this truck over the years always comment that this truck put out a lot of fire over the years and is missed. 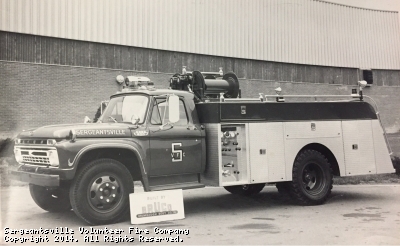 Then a canteen truck was bought, although it was not new.  Members commented that it was not very reliable and often had to be towed.

Fire hydrants finally were implemented in Sergeantsville and the men finally had a lot of water readily available when needed. 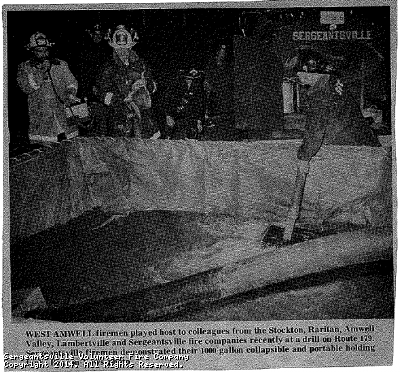 In 1973 we received a 1973 Ford 900 with 1000 gallons of water and a 750 GPM pump.  The bell that was on this truck and is now on our 1997 engine was donated by Vincent Abraitys, a charter member of the company and long time Hunterdon County Freeholder, at the annual banquet in 1973. 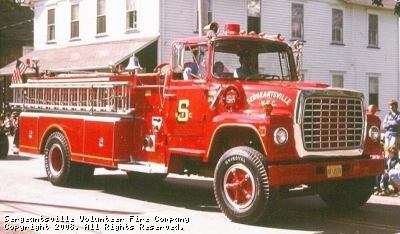 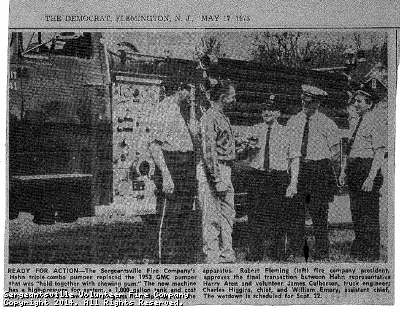 At the annual banquet in 1976, Howard Johnson was paid tribute for being the oldest member in the fire company.  He was 100 years old.

1976 was also a very bad year.  It was a year when a fellow firefighter, Assistant Chief Raymond Miller died serving his community.  He left behind a wife and three children  He like any other firefighter went to the fire that night not even second guessing himself.  He was struck on the back of his neck, between the jacket and helmet by an abandoned electrical wire.   The fire company was very saddened by this unfortunate event. 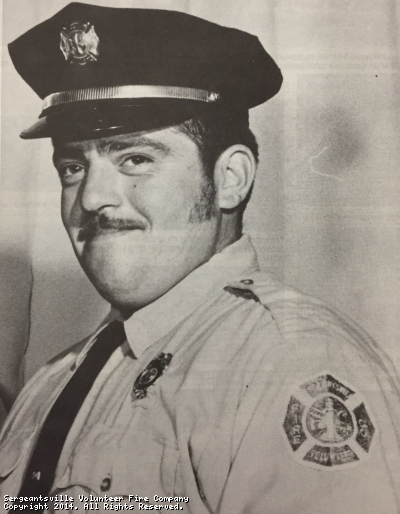 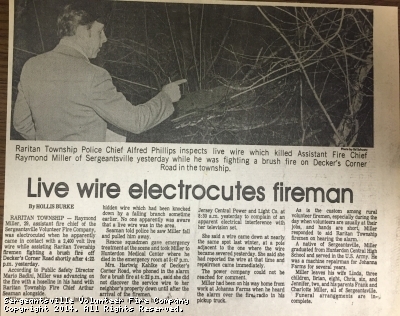 Starting in 1965 and running for about 20 years, the fire company ran an annual carnival as a fund raiser.  Past Chief & Charter Member Bill Emery ran the carnival for 18 of those years. 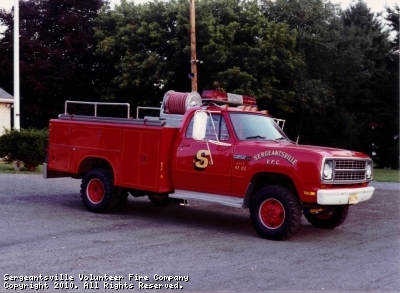 In 1986 we received a Ford 8000 series pumper that was equipped with 500 gallons of water and a 750 gallon per minute pump.  This new pumper had a rear jump seat which allowed firemen to ride seated behind the cab.  Prior to this firemen had to ride on the tailboard of the trucks. 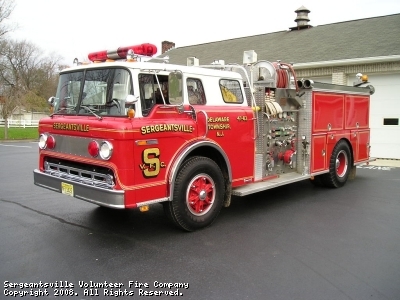 In 1989 we received a Mack Saulsbury tanker which held 2500 gallons of water and had a 1000 gallon per minute pump.  The new tanker held 2 portable folding tanks and was the first tanker in the area with side dumps.

In 199? the fire company completed it's large addition to the firehouse adding a banquet hall. 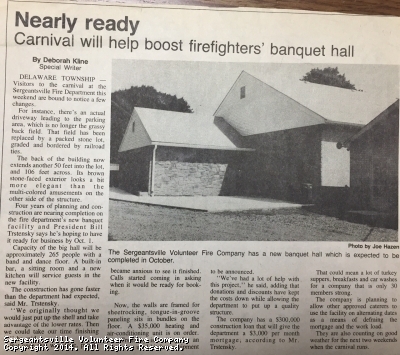 In 1997 we received a KME custom cab pumper with a 1250 gallon per minute pump and a 1200 gallon tank.  This pumper had an enclosed 8 man air-conditioned  cab so that all the responding firemen could ride inside the truck as riding on the tailboard was no longer allowed.  This truck also had a light-tower installed which provides lighting to fire and accident scenes.  This is an in-service truck.  For pictures please see our apparatus page.

We replaced our aging brush truck in 2001 with a Ford F-350 utility body brush truck.  In 2012 with the low number of brush fires, the company though the truck could be better used as a utility truck and the brush pump & tank were removed and sold.  This is an in-service truck.  For pictures please see our apparatus page.

We made some big advances with the delivery of our 2008 KME rescue pumper.  The pumper has a 750 gallon tank and a 1500 gallon per minute pump which can discharge compressed air foam.  Compressed Air Foam mixes a foam concentrate with water and air to make a finished foam solution that makes the water more effective.  Additionally this truck is equipped with vehicle rescue tools "Jaws of Life" to rescue trapped persons from automobile accidents.  This truck as well has a light tower and a large PTO/hydraulic driven generator.This is an in-service truck.  For pictures please see our apparatus page.

In 2012 we received a new International/Pierce Tanker that holds 3000 gallons of water and has a 1000 gallon per minute pump.  Additionally, we purchased a 2012 Chevrolet Tahoe with custom command box to be used as our Chief's vehicle.  Previous to this we had two used police vehicles that were used as chiefs vehicles.  These are in-service trucks.  For pictures please see our apparatus page. 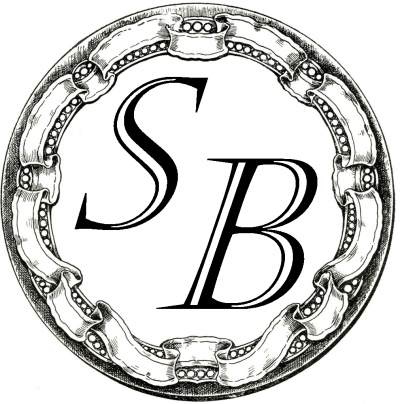 Click on the link below to donate to the fire company online.  Thanks! 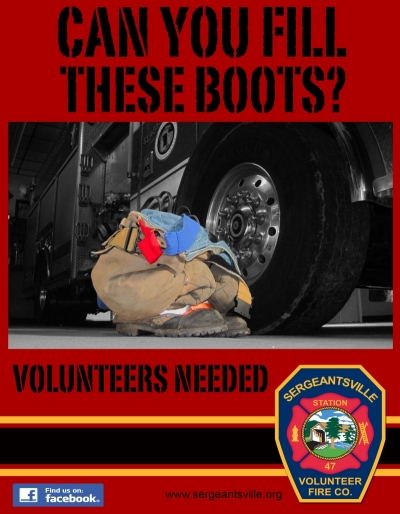 This site has been viewed 580,473 times.
Events
Pictures
Apparatus
Maintained by the members and staff of Sergeantsville Volunteer Fire Company. Designated trademarks and brands are the property of their respective owners. Copyright © 2006-2022. YourFirstDue Inc. All Rights Reserved. Content on this web site is supplied by Sergeantsville Volunteer Fire Company. YourFirstDue Inc. cannot be held responsible or liable for any content, text, pictures, or any other media found on this web site.
Management login
Powered by